Please excuse any delays in the dispatch of your order. For now, it may take up to 3 working days to process your order. We are constantly replenishing our stocks of all items, so please consider others when ordering. Thank you for patience and continued loyalty during this challenging time. We continue to update our website, to make your shopping with us a rewarding experience. Stay safe and be well.

We offer FREE UK mainland delivery on orders over ￡40.

This is the very best quality brown rice mochi, very tasty grilled and wrapped in nori sea weed, dipped in soy sauce, or added to soups and stews. It can even be grated over gratins in place of cheese.

mocha with mugwort is superb, very moreish, and incredibly addictive, very easy to cook, beware of setting of smoke alarms if you cook it for to long, generally I find 6 minutes is enough and not 8 as it says on the packet! but thank you Clearspring for my order of several other yummy things as well as this one, always well packed with care and dare I say love, and always delivered very quickly, I adore your products but please try and bring me some natto!

This is such a great product to have in the cupboard. Easy to use in many ways - pan-fry, add to soups etc. I like to grate it coarsely and stir into a rich, winter vegetable soup, seasoned with miso or tamari soy sauce and ginger. It gives a lovely, warming and creamy texture. And, mochi is so good for you too!

Let customers speak for us

It’s a lovely combination, I was born in Russia we usually have buckwheat porridge for breakfast and other dishes. This one is very light perfect for mornings. If you are detoxing this is definitely a go! 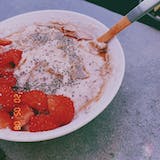 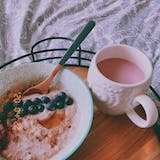 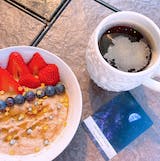 Your delivery was excellent. Great product!

For fruit jellies it needs plenty of flavouring to mask the slight seaweed taste. Sets well , also good for savoury use.